Reviving our past or history is like filling the vacuum of lost waves of time: an effort put up with archaeological enquiry and sympathetic imagination. Clearing the historical dust is like collecting and adjoining pieces of a puzzle together, whereas this puzzle is a complex Frankenstein-like beast of archaeological ruins, artefacts, decoded languages in epigraphy, or remaining texts hidden in forgotten extinct scripts. Indian artist M. R. Pimpare has managed to put up together some pieces of this puzzle in his work on the Ajanta Caves.

Mr Pimpare has been researching and rebuilding paintings from the caves since 1965, and his paintings are viewed and honoured by art historians, writers, archaeologists, and statesmen in India and across Asia. In 2012, Pimpare was mentioned in the Limca Book of Records (an annual reference book published in India documenting human and natural world records) for having rebuilt some 350 paintings from Ajanta over the past 50 years.

I asked Mr Pimpare if he knew that he would be dedicating his entire life’s energy to a single although major cave site of ancient Indian Buddhism. As Pimpare shared his experiences that inspired him to set upon the path of exploration that would soon become his goal of life he said when he visited the Ajanta Caves for first time on a school trip a long time ago, most artists of the Archaeological Survey of India just copied the murals simply as they saw, without endeavouring to correct or decipher the elaborate details that is been damaged or lost altogether.

These experts lacked the in-depth knowledge of anatomy and art. Even at that innocent age, he was upset to see the condition of the cave paintings and their urgent need for an accurate system of refurbishment,” he explained.

At that time, he thought that someone should attempt to rebuild the artwork to make it complete and clearer, so that everyone could more easily envision the worn-out beauty of the paintings as they were first produced, stated Mr. Pimpare. “As I grew older, I used to become more acquainted with the caves. Then I got my first job in the archaeology department as an artist. Soon i was continuously visiting and studying the caves. I then requested my boss to allow me permission to make paintings as he was aware of my drawing was good. It has been five decades since, and I’m still going.”

The artist strongly trusted that his work is of a spiritual nature. “Whenever I am performing on some panel of the Jatakas in Ajanta, if I can’t recognize it, I close my eyes and meditate for a few times. I am then able to envision a clear picture of damaged portion of the panel, as if I am watching the entire picture from the second century BCE. I was able to complete because of This, figure by figure and panel to panel, a, an assortment of 300 paintings in 50 years.

It takes a enormous amount of time to complete even single figures in complete shape and form as I must pulled out all elaborate details of the body, ornaments, hairstyles, facial characteristics, and costumes.”

Mr Pimpare said, cave 10 was the most challenging rehabilitation project of his career: “This is the earliest and most dilapidated cave in Ajanta. It took me years to complete this task. I grappled searching for dependable references and details of this mural. I spent many days in the cave, remarking the architrave and trying to associate each figure line by line. The painting has 68 human figures and 53 animals, along with figures of the Buddha and stupas.”

Mr Pimpare’s work is soon to be carefully selected by photographer Kshipra Simon, who will be manifesting his productions at the Inner Path Festival of Buddhist Art and Philosophy this September in New Delhi. She met Mr. Pimpare in 2018, when she was carefully selecting an art show for Buddha Purnima with Indian prime minister Mr. Narendra Modi. During the selection period of works and artists, she was sent Mr. Pimpare’s profile and work for the show by her organisers she said. “When I met Mr. Pimpare and his daughter, Mayura, and spoke regarding his work, I grew captivated with his dedication to reinstate the murals of the Ajanta Caves. I was soon learning more about the caves from Mayura.” Pimpare’s daughter, Mayura, has been an unofficial ambassador of her father’s art, having exhibited his paintings at meetings with senior Indian political figures and foreign diplomats.

“I did some research and found that while there was a lot of digital restoration by photographers or documentary filmmakers, M. R. Pimpare is really the only artist restoring the murals through his paintings,” said Kshipra. “I wanted to show the world the dedication of an artist to a place where there is no light and who is re-creating artwork that is thousands of years old.”

On being asked Kshipra what she denotes most stunning of Pimpare’s work. “The most beautiful thing about his regenerated paintings are how we’re able to see dilapidated elements in a fresh and new light,” she related. “Once we view these areas again, we can cherish every aspect, be it light, a repaired body part like a hand, a nose, or eye. All the details have been meticulously taken care of with daring outlines to determining between the faded or spoilt shapes of the surviving figures. He pays deep attention to highlighting the difference between the hues that have been plugging away and those that have been preserved. He did a specifically exceptional work with the beautiful Vishavantara Jataka and a scene of Buddha preaching in Cave 17.”

Mr.Pimpare has never intended to leave his lifelong dedication to the Ajanta Caves’ murals. Even when he has to stop against his will, hopefully there will be a new generation of Indian Buddhist art lovers like Mayura and Kshipra undertaking the sometimes-threatening call of art restoration (dealing with tackling of bureaucratic hurdles and government consents). I hold onto the hope and positive outcome for the future of this field, especially since at its heart it is radically conjoint and a combined effort between artists, restorers, scholars, and policymakers.

Kshipra expressed it in superior manner when she winded up: “The preservation and interpretation of Buddhist art is an expansion of Buddhist spirituality. Its Followers seek predominance and a link to trace the superior dimension of existence, which in succession, motivates their artwork. In this sense, art becomes a close expression of dedication, and the artist a channel for divine interaction, this can be seen in Mr. Pimpare’s reconverting of Ajanta’s cave art.” 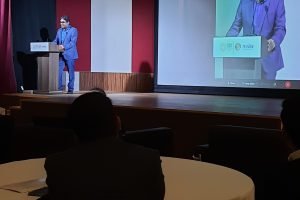 Revelation of Best Kept Secrets of Ancient Indian Culture at Dubai, with support from Vedan Choolun