New Delhi: Bringing to the fore, that too effectively, the deep connect between art and architecture, is the ongoing solo exhibition of Smita Jain, “Jharokha”. Her 21 works — all acrylic on canvas — are on view at Uchaan Art Gallery in Gurugrams Souk Mall till April 1.

That Jain has always been fascinated by historical architecture is not difficult to surmise. She was born in a haveli called Devashram located in Bihar’s Bhojpur district, which also happens to be one of the works in the show. The huge structure in brown, surrounded by verdant greenery, looks warm and welcoming!

“It was a culturally rich household filled with artists. A vibrant house which was always filled with laughter, joy, childhood dreams and sometimes tears.” Though decrepit today, it still tugs her heart. “It is all about those wonderful memories that I treasure as my most valuable possession!” 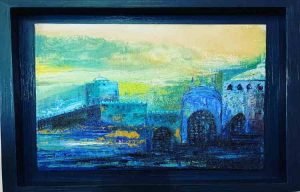 Having studied textile designing, Jain was always moved by ancient structures like New Delhi’s Humayun’s Tomb. “It is a window through which one can experience the tales of prosperity and ruin told by a combination of ancient architecture and a myriad of colors,” she remarks.

For instance, “Gateway” with imposing and intimidating walls on all sides, shows a way to enter and exit. “Symbolising the beginning and end of a dynastic journey, it is here that people from different cultures and walks of life congregate without regard to status, gender and intentions,” says Jain. 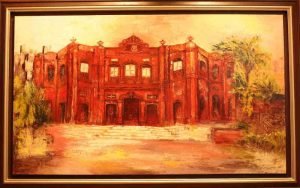 “Monument” too showing a solid stone structure with lovely blue and green firmament in the background represents the indomitable spirit and vigour of the past.

An arresting work of Jain is “Memories”. Stark, stony and silent, it may be mute but is more than willing to share its stories. The fine lines of the stone steps, the marks on the walls, and the beautiful designs on the parapet are truly engaging. “These structures are an encyclopedia of the entire gamut of human emotions including birth, death, happiness, love, sadness, betrayal, anger, blood, grandeur and ruins, displayed by its generations of inhabitants,” she observes. 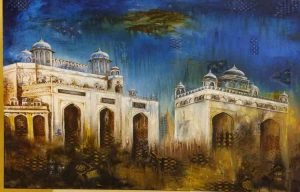 There is a utilitarian facet of buildings, too, since time immemorial. Manmade man-made structures have shielded humankind from beasts and vagaries of nature. Jain’s “Shelter” and “Amnesty”, both highlight this aspect.

The former through its massive structures, closely huddled, gives one a feel of safety in these bastions. The yellow and reddish hue of the buildings and the bright yellow sunlight on the top of them give it a touch of reality. In “Amnesty”, the blue edifices, with water at the bottom and the white and yellow skyline dominated by azure clouds brings out the beauty and functionality of these constructions. 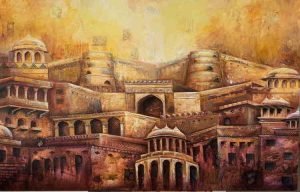 On a bigger scale the same protection is afforded by “Precipice” and “Fortress”. In the former, the yellow fort on the cliff’s edge oversees a blue waterbody, and shows swirling motion of clouds in green and white. The latter shows a lone white monument with its minarets, offering unwavering security.

Jain makes a very interesting comparison between these two sets of works. “Both parents have a very important role to play in everyone’s life. While ‘Amnesty’ and ‘Shelter’ are like mother, protecting even at the cost of personal distress, ‘Precipice’ and ‘Fortress’ are like the strong Lakshman rekha of father’s protection, ensuring every possible effort till the very last, to ensure safety, security and wellbeing of all inhabitants.”

Jain strives to take the viewers to a metaphysical and philosophical plane through her works “Twilight”, “Ascent”, “Faces of Summer” and “Inversion”. The bright and varied shades of red and orange in “Twilight” make one visualize the sunset while the glimmers of moonlight make its appearance. The bluish and violet tinge of “Ascent” gives a feeling of ascending from one level to the next. “The former is about accepting both happiness and sadness as part of life. Life would be incomplete and extremely uneventful, if any one emotion is missing. Whereas, ‘Ascent’ is an effort to capture one’s aspirations to excel and grow as high as heaven in all endeavours in life,” explains Jain.

The brightness of hues in “Faces of Summer” dazzle you as one can feel the unbearable heat of the sun beating down on the structures. “Inversion” on the contrary brings out the night and winter. Diverse shades of yellows and the buildings give an ethereal feel. What makes this work truly fetching is a water pool at the bottom with lilies in it. Elucidating about them, Jain says: “The artwork ‘Faces of Summer’ depicts that looks can be deceptive as every good thing in life has a darker side. Sun is one such example. ‘Inversion’ is all about human resilience and strength of character that is displayed which eventually helps them triumph all adversities.” 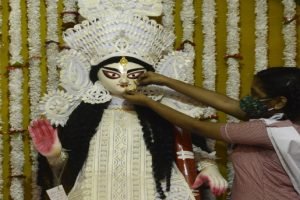 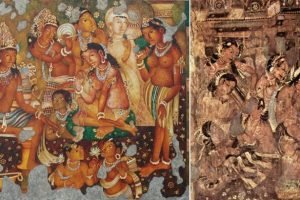 A new approach to preserve and promote Indian culture, Art, and heritage
Mandu, Khajuraho festivals to be held this month in Madhya Pradesh
Comment